-the model is fully rigged and skined.
-The scene is exactly the same than the presentation picture - all different objects are included.
-A short animation comes with an other scene - See the demo video file in preview section.
very easy to anime, and no special render engine needed, just unzip and render.

Dinko the alien is a friendly character who appears in counting books, coloring books, and toys and in various educational materials for children age 1-4. He travels through space, meets lots of different friends and learns about their living and customs. It is an American computer-animated series produced by Mike Young Productions, Taffy Entertainment, Antefilms Productions, and John Doze Studios in 2005. Crest Animations studios brought this story to life. It was created by Jeff Muncy and all episodes are mainly written by Dan Danko and directed by Andrew Young.

Dinko is a small, green alien species who has totally fallen for the earth and originates from the planet Dunk where all look identical to each other. He thinks it’s wonderful that things are so chaotic and loud here. Dinko is a leader and biggest troublemaker of the alien gang as well. Though he always tries to help Tommy, but always mucks things up, because he misunderstands Tommy’s words to the point of insanity. Then he will go to extreme measures to solve his curiosity to these words and earth rituals so on.

Buy Dinko Alien 3D Character Rigged by supercigale on Low poly of Dinko. We have made 3D model of Dinko Alien in Max version for use in architectural visualizations and animations maximally close to the original. Click on the button and save the file on your computer to work, edit or customize your design. You can also find more 3D designs for printers on Dinko Alien Character Rigged 3d model at FlatPyramid. Thank you for showing interest in buying 3D model from FlatPyramid kuras ir pieejamas lejupielādēšanai komerciālai, nekomerciālai un redakcionālai lietošanai. 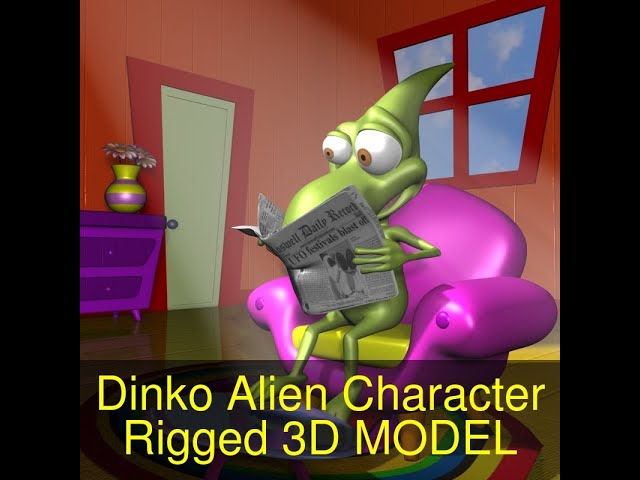